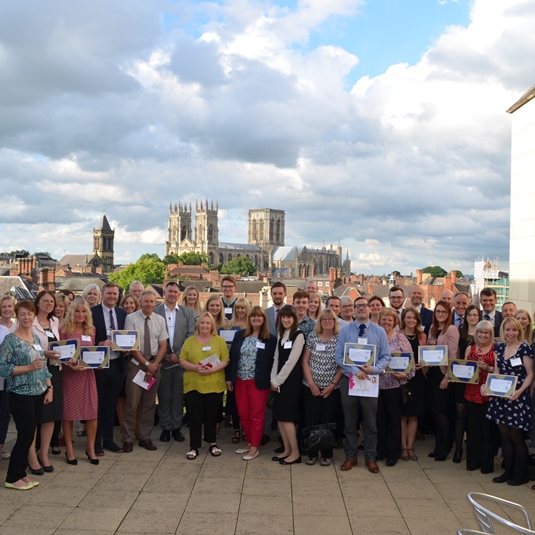 Ten years of employee-volunteering have been recognised at the York Cares Golden Moments of the Decade’ Awards.

The event brought together employee-volunteers, their employers and the community organisations they have supported to congratulate them on the contribution they have made to the city over the past 12 months and the past 10 years.

BBC Radio York presenter Elly Fiorentini presented the 2016 awards to volunteers from nine York businesses with a further six organisations receiving special awards for their outstanding contribution over the last 10 years. The Golden Moments of the Decade awards went to North Yorkshire Police, Benenden, Tesco, University of York, Portakabin and The Partners Group.

Monica Green, Director of York PR and marketing agency The Partners Group said: “York Cares has the support of more than 40 businesses and 13,000 employee volunteers have given their time to over 1,000 community partners and delivered over 127,000 hours of volunteering over the past 10 years. This has had a huge impact on the city and the awards are a fantastic way to recognise this contribution.  We’re delighted to work with York Cares and would urge more businesses to get involved.”

Over 800 employees each year now undertake Team Challenges to help with digging, painting and gardening in community venues. One such challenge was undertaken by a team from Aviva who won an award for their work fundraising and transforming the gardens at Hamilton House Children’s Home. Lindsay Brown from Aviva said: “The rewards from volunteering are absolutely amazing. Firstly, to see the children and the community that you helped really enjoy it, and then as a team yourself you have a good time together and that can only really help the company that you work for”.

Windsor House older people’s home is a regular partner with York Cares. Julie Borthwick, Manager, said: “Volunteering is absolutely paramount to an organisation like ours. Our staff work as hard as they can, but to have an extra pair of hands come in is just wonderful and it’s so important to improving the residents lives”.

York Cares was launched by four employers – University of York, City of York Council, Aviva and Garbutt and Elliott. It now has 43 employer members and represents over a quarter of York’s workforce from public and private sectors. It has five key volunteering programmes which each aim to bring together the resources and expertise of employees with charities and communities where they can make a difference.

Robert Partridge from University of Leeds but originally from University of York, was part of the team of employers who founded York Cares and helped to present the Golden Moments Awards. He said “York Cares has proved over its first decade that York’s employers and their employees really do care about the city in which they live and work.  At this rate, by its 20th birthday, the city’s entire workforce could be involved!”

Congratulations to all the award winners and thank you to everyone who helped make the Golden Moments Awards such a fantastic event!