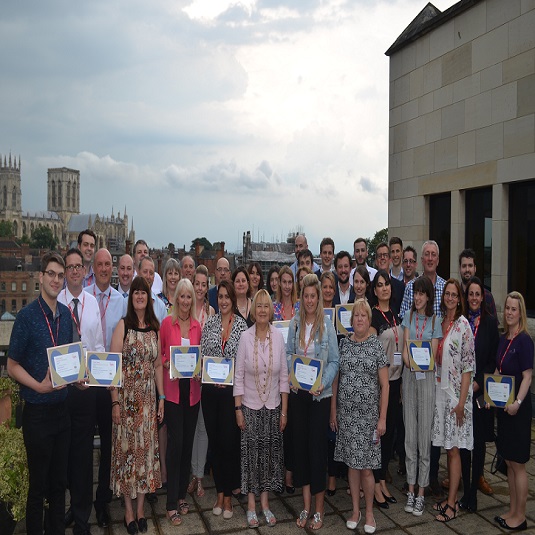 Last night was our annual Golden Moments awards. The event brought together over 100 employee-volunteers, their employers and the community organisations they have supported to congratulate them on the contribution they have made to the city over the past 12 months.

BBC Radio York presenter Elly Fiorentini hosted the evening, interviewing volunteers about their award winning activities. The awards were presented to volunteers from eleven York businesses by Cllr Barbara Boyce, the Lord Mayor of York. The compere for the evening was Andrew Ferguson from the University of York who is the longest standing board member.

After an ice-breaker activity where we learnt that one of the attendees had a certificate for ostrich riding, and that another was an ex-professional footballer, the awards began!

The winners of the Golden Moments awards were:

“The difference that volunteers made over the three days at the centre was phenomenal. There’s so much great stuff that goes on in the centre and we wanted the outside of the centre to reflect that. Thanks to all of the volunteers who took part, now it does. It really has put smiles on everyone’s faces an transformed the centre. Thank you!” said Stephen Collins.

The second set of awards were then announced. This time it was the Golden Moments of the Year 2017 were to volunteers whose contributions were deemed to be outstanding.

The winners of Golden Moments of the Year 2017 were:

Congratulations to all the award winners and thank you to everyone who helped make the Golden Moments Awards such a fantastic event!