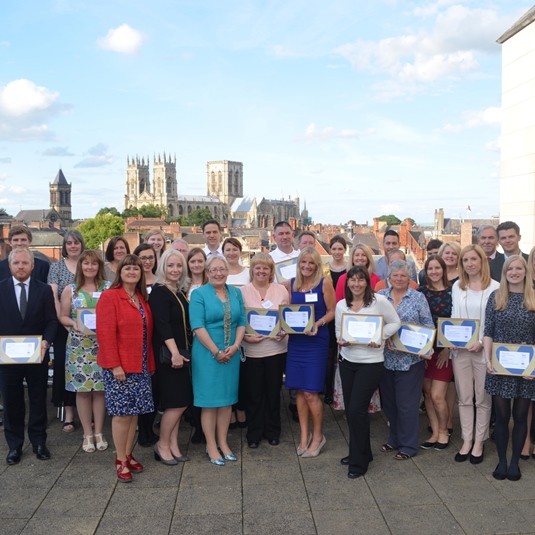 Celebrating the employee volunteers who make York a better place

Last month over 100 volunteers and supporters from over 30 organisations came together to celebrate the incredible contribution that volunteers have made to the city at the annual York Cares Golden Moments Awards.

With the beautiful view from the Aviva Boardroom as our backdrop, the tables laid out with chocolates donated by York Cocoa House and the champagne fizzing in glasses, it was set to be a fantastic evening.

York Cares volunteer Jon Greenwood, Director of Commercial Services, University of York was aptly dressed in a gold sequin jacket and bow-tie for his role as compere for the evening. He was joined by BBC Radio York broadcaster Elly Fiorentini, who kick-started the evening by encouraging the guests to share some fun facts about themselves. We discovered that one of our volunteers wears odd socks every day for good luck, another had cooked for the Queen and lots more besides!

Nine Golden Moments awards were presented by the Lord Mayor of York, Cllr Sonja Crisp, to individuals and teams who had been nominated for their outstanding contribution to volunteering through York Cares.

Amongst those in receipt of awards was a team of interns from the Joseph Rowntree Foundation who supported young people through a Christmas Collection for SASH, an organisation which aims to provide safe accommodation and support to vulnerable young people who have been made homeless. Reflecting on their collection, the interns said that the response from colleagues had been amazing and they had raised enough money to donate vouchers for the young people to choose their own gifts.

Also presented were eight Golden Moments of the Year Awards which acknowledged those volunteers who had gone above and beyond to contribute to the community. Amongst the winners was the Aviva Women’s Network team who worked alongside students from the University of York to deliver a confidence building workshop for Year 11 girls at Huntington School, aiming to provide an insight into the world of business. The team described how wonderful it was to watch the girls grow in confidence throughout the session, and hoped that they would take this forward into future careers.

There were many more great stories to be heard throughout the evening of how our volunteers are helping to make York a better place.